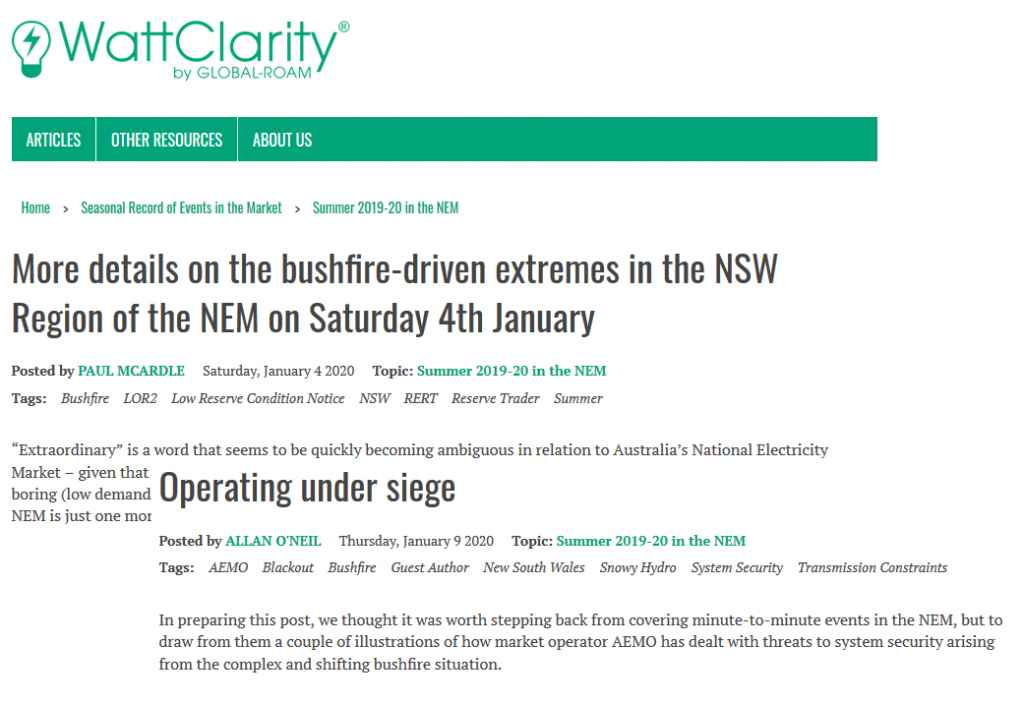 The severe and ongoing bushfires currently raging across Australia have grabbed attention nationally and internationally. Through WattClarity, we have sought to cover the implications of the bushfires on grid reliability and system security with events still unfolding as of mid-January.

High temperatures and fire-related disasters have an immense effect on an already volatile and shifting industry. As Allan O’Neil pointed out on the complexity of an electrical grid: “with complex machinery, we prefer to be in a tightly controlled environment – enough things can go wrong already without having all sorts of external risks and shocks to deal with.” Some of this added risk and complexity was echoed by Paul McArdle in one article, quick to note the AEMO’s efforts to understand the temperature limitations of wind and solar farm operators as operating concerns rose.

Later on Saturday the 4th of January, we published news that bushfires around the interconnectors in the Snowy Mountains regions caused the NSW and VIC regions to separate. Using our NEMwatch market overview dashboard and ez2view higher-end dashboard, we were able to show that the interconnector flow between the two regions dropped to 0MW during the 15:10 interval.

Around the time that WattClarity was originally launched back in 2007 we published analysis of major bushfire events, albeit largely confined to Victoria, and the significant stress on the grid that was caused. The stress ultimately lead to a state-wide blackout across Victoria after three main transmission lines tripped.

WattClarity’s coverage of the impact of the 2019/20 Australian bushfires on the NEM can be found below:

In addition to our analysis on WattClarity, we were also invited for comment from several different members of the media. Mark Ludlow and Angela Macdonald-Smith of the Australian Financial Review quoted our CEO Paul McArdle in their piece “Heatwave and fires test the power grid”:

Global-Roam managing director Paul McArdle said the temperature in Adelaide – where it did not drop below 40 degrees until 7:30pm – was the biggest driver of the price spike which led to record peak demand for the region.