At midnight on October 1st 2021, the long-awaited 5-Minute Settlement (5MS) market rule change finally commenced. It was a significant change for the entire market but was rather consequential for us at Global-Roam, as it had rather large implications to the way AEMO trading data was published and interpreted.

Major upgrades to our software with the introduction of 5MS

The introduction of 5-Minute Settlement brought with it a new AEMO MMS data model – MMS 5.0 – the incoming data model meant considerable updates had to be made to all of our software products to cater for the change in cadence, volume, and interpretation of trading data.

In early July we released v9.0 of ez2view. This was done as a temporary measure so that our clients could prepare for 5MS, while our team continued work on a larger upgrade to the software before the full commencement of the rule change. Version 9.0 was fully compatible with the AEMO’s new MMS 5.0 data model, but had some known performance issues when analysing historical bids.

This version was superseded in late September with the release of v9.1 which contained significant performance improvements to bid analysis. Our work to optimise how we handled bid data means that the analysis of bids in several widgets is now far faster and smoother than any of the previous versions of ez2view, but especially noticeable when upgrading from v9.0. 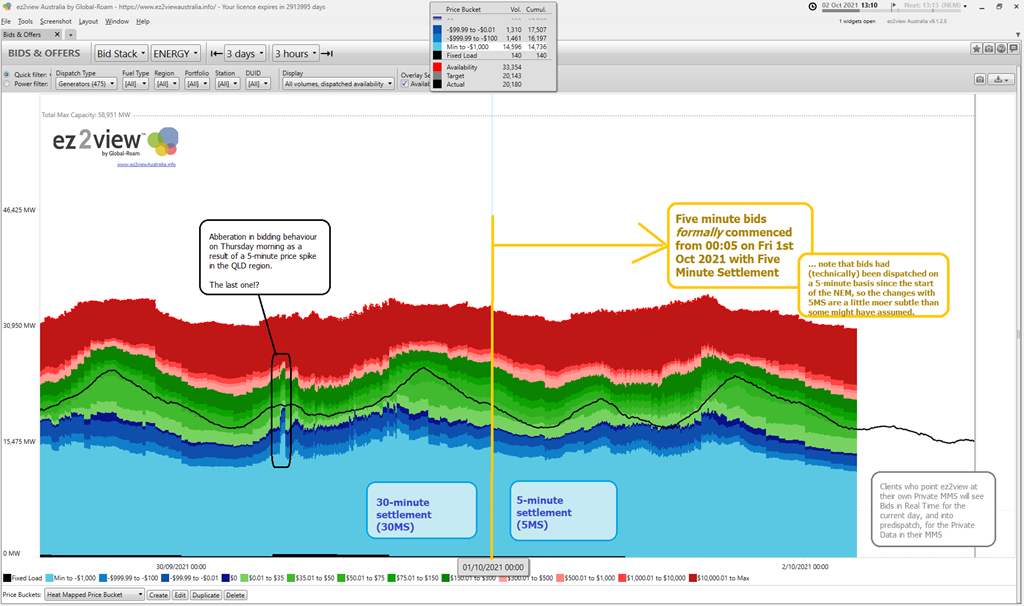 A look at ez2view’s Bids & Offers widget after the commencement of 5MS. Source: WattClarity

With the release of v9.1, we also outlined a timetable for when we will switch off older versions of ez2view that have become obsolete with the introduction of 5MS.

A full release note that details the changes in ez2view v9.1 is available here.

NEMreview is currently in-between versions – where v6 is installable software, and v7 is a web-based app. Version 6 was developed a number of years ago and continues to be the official release of the software, while v7 is currently under development but is available to clients as a beta release. Both v6 and v7 were upgraded throughout August and September to reflect the 5MS changes.

Version 6 was re-released as v6.5 in September and contained updates to the underlying data series, along with a revision to the way in which the software is packaged.

Version 7 underwent several changes under the hood so that trading data could be accessed at the new 5-minute cadence. Concurrently, we also released a new help site for v7 which is aimed at helping existing users gain more value from the software. v7 continues to be under development, and we invite users to contact us directly if they have any feedback or suggestions on the current iteration of the app.

A full release note that details the changes in NEMreview v6.5 and v7 is available here.

NEMwatch was upgraded to v10.2 in late September and contained several updates to the on-screen interface to reduce the amount of ambiguity between 5-minute and 30-minute data. In addition, we also shifted the source of our small solar (rooftop solar) data from the APVI to the AEMO.

A full release note that details the changes in NEMwatch v10.2 is available here.

deSide was updated to v6 in late August and contained updates to the interface and mechanics of the client, updater and ticker components of the software. We sent out several notes to all of our deSide customers over the preceding months so that they were fully aware of the 5MS changes and what they meant for the market.

A full release note that details the changes in deSide v6 is available here.

Generator Insights 2021 scheduled to be published in Q4

With the 5MS transition largely but not entirely behind us, our attention has begun to turn to Generator Insights 2021 which is currently slated for release before the end of 2021. Further updates on it’s development will be posted on WattClarity. You can pre-order your copy of GenInsight21 using this form here.