On Saturday 25th August 2018, the NEM experienced what has been called by others a “near miss” event, with both Queensland and South Australia being islanded from the rest of the NEM as a result of the tripping of QNI and Heywood interconnectors (respectively).

I saw this happened on the day, so had time to post an initial brief article “Both QLD and SA islanded from the rest of the NEM on Saturday 25th August 2018”.  The following Monday, i was able to follow up with “Taking a look at Saturday’s islanding event through 4 second SCADA data”, also on WattClarity.

With some assistance from a couple of external Analysts, today we’ve posted “Further analysis of the (very rare) double-islanding events of Saturday 25th August 2018” via WattClarity, by drawing heavily on our ez2view software.

In response, we saw a range of activity ourselves, including:

As such, it was not really a surprise that we fielded a number of questions about what was going on.  We appreciate these questions – as they stretch our capability to understand, and explain clearly, complex events such as what happened on 25th August.

As would be expected, there was plenty of coverage (and much speculation) about the event via social media (I only participate in Twitter and LinkedIn).  Here’s one particular exchange, noting that there were many: 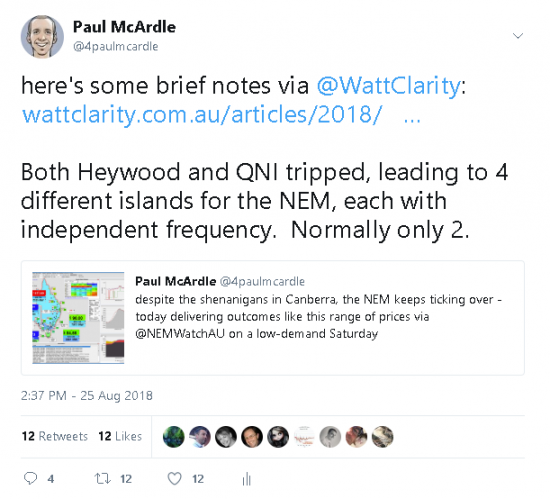 First off the blocks (as far as we know) Giles Parkinson utilised the early information published in our WattClarity article on Saturday to write “On first day as PM, Morrison learns difference between Big Battery and Big Banana” here.

We, in turn, grabbed two of the images in Giles’ post to update the deeper analysis we had coincidentally posted on the same day.

We noted a reference to WattClarity in Andrew White and Perry Williams’ article “Brace for more blackouts without a clear energy policy, Spark CEO warns” in the Australian.

On Saturday, we noted that Ben Potter and Angela Macdonald-Smith utilised the 2 articles on WattClarity in putting together their online article “How the NSW energy grid almost went dark last week”.  The print edition (titled “Bolt from the blue bodes ill”, and included below) also included an artist’s reproduction of the NEMwatch snapshot originally included in the WattClarity post on the day of the islanding. 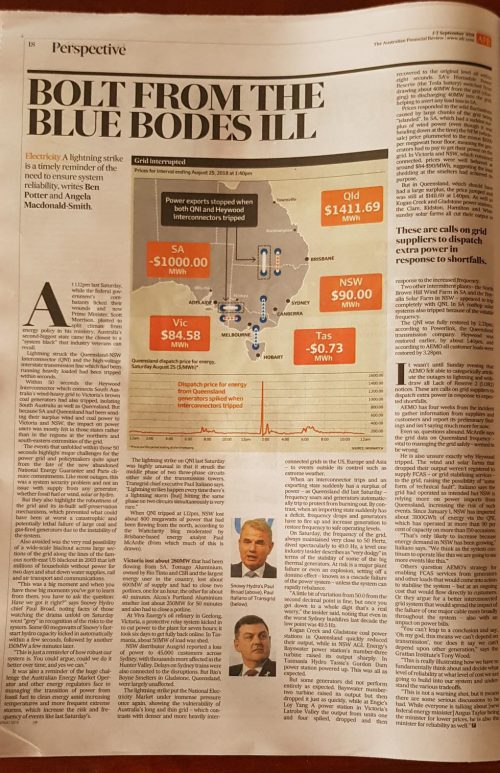