The final quarter of 2021 was another busy one for our team at Global-Roam. A year that already felt like a marathon was rounded off with a sprint finish as we completed the final pieces of written analysis that allowed us to publish ‘GenInsights21’ just one and a half weeks before Christmas Day.

Below I have summarised some news from around the company during Q4. 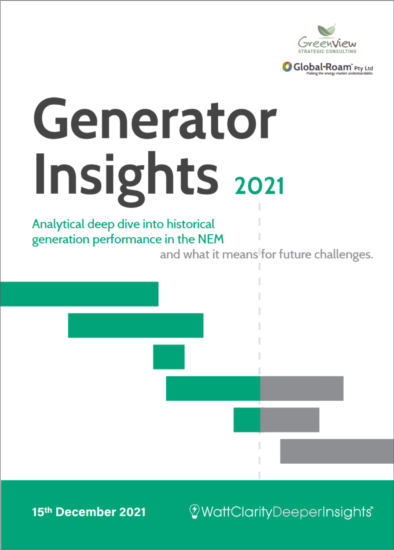 On December 15th 2021, we were pleased to release our Generator Insights 2021 report in conjunction with the team at Greenview Strategic Consulting, led by Jonathon Dyson.

The 622-page report is an update to the analytical component of the Generator Report Card that we released in May 2019. GenInsights21 covers much ground, it looks at 20+ years of generation data in the NEM, with a particular focus on more recent years – exploring what the past tells us about future challenges in Australia’s energy transition. More information about the full report can be found on WattClarity, and it’s worth noting that Paul has published an article that lists the x28 appendices that are covered in-depth within the report.

GenInsights21 is another demonstration of our continually growing internal and external market analysis capabilities. Specifically, it’s development enabled us to leverage the skills and experience of team members that have joined us in the past couple of years. Its release has led to numerous conversations with market stakeholders about the direction of the market and industry at large, and many of the insights we gleaned while writing the report will guide our decision-making for how our software will evolve in 2022 and beyond.

In the two months since it was published, several news sites have covered the analysis and research within GenInsights21:

In the coming weeks, I will publish an article on WattClarity which includes media references, along with direct customer feedback that has been sent our way.

Hot on the heels of the arduous task of upgrading all of our software products for the introduction of 5-minute settlement in Q3, the commencement of the Wholesale Demand Respond Mechanism (WDRM) took effect a little over 3 weeks afterwards. Like 5MS, the WDRM rule change also required some work for our development team in order to cater for the new types of data to be published under the mechanism.

In the first week of October we made ez2view v9.2 available to our clients. This minor release corrected several small bugs and enabled the display of real-time data for non-scheduled units in the ‘Station Dashboard’ and ‘Unit Dashboard’ widgets.

Version 9.3 was released a little under one month later which incorporated the new WDRM data type. One example of the utilisation of this data is shown in the image below, taken from our ‘NEM Map’ widget, which shows 10MW of Negawatts being dispatched in NSW. This release also included several enhancements to other widgets incorporating this data including the ‘Regional Trends’ and ‘Swim Lanes’ widgets.

On a related note, in December I wrote a short article examining how many Negawatts had been dispatched through the WDRM mechanism in the weeks after it’s implementation (while just last week our own Linton Corbet provided an update about the three WDRM units that have been registered). 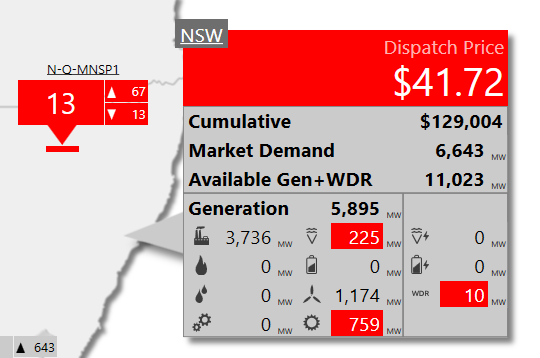 Presenting at the Australian Institute of Energy

Paul delivered a presentation at an event organised by the Australian Institute of Energy in Brisbane on December 2nd, 2021. During the event he shared some early insights into how the introduction of 5-minute settlement had begun to affect the market. Some of this analysis and insights were also covered in Appendix 28 within GenInsights21.